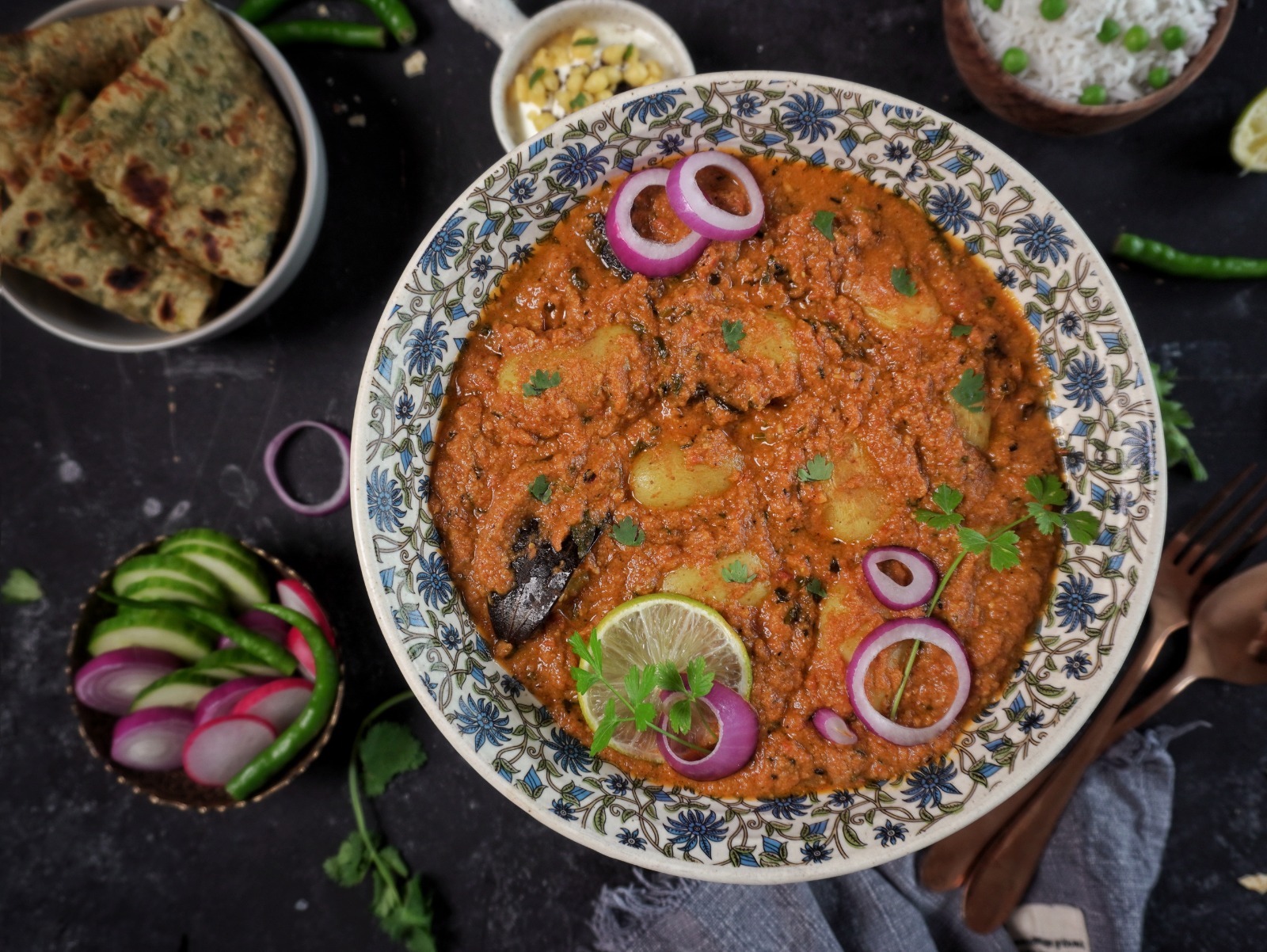 Dum aloo is described as soft baby potatoes dipped in rich and creamy onion-tomato gravy. & you don’t need to deep fry potatoes to get that burst of taste and flavors. Just let the spices, other ingredients, and the cooking process do their magic.

One day, I just decided to make dum aloo without deep-frying the potatoes and see how it tastes. I worked on the gravy, made it rich and creamy using cashew cream. I added a hit of tanginess with the curd and to balance that I added a pinch of sugar. And the game-changer is the master of all ingredients – Kasuri Methi. It makes the gravy even tastier.

I poked holes in the potatoes so that the flavor can reach deep inside them. I worked on the process of cooking too where I let the potatoes cook in the gravy for a little longer. It develops more flavor. The end result was so damn delicious. Jatin said that these are irresistible. I made it for my chef friends. They all loved it so much and even asked for the recipe. Finally, the mission was accomplished to make a delicious non-fried dum aloo.

If you are in a hurry, watch the video instead and If you enjoy watching it, Plz Subscribe to our Youtube channel.

PREPARATIONS FOR THE RECIPE

In restaurants, the potatoes are deep-fried to get a nice firm and tender texture and also to make the recipe delicious. But I don’t do that. I simply poke the potatoes and dip them in the hot boiling water for a few minutes. That doesn’t make it mushy and less tasty. Try this recipe and you will know what I am talking about. But for that, you need to use baby potatoes. They do not just look good in the recipe but they cook fast and retains their shape even after being dum-cooked for a long time. They don’t become mushy.

Also, you don’t need to peel the potatoes. They are tiny and peeling them is laborious. I used to do that. But not anymore. Moreover, their skin is so soft that after cooking you won’t even notice the skin.

To add a nice richness and creaminess to the gravy, I add cashew paste. Now, this is one preparation that you need to do in advance. I mean, you need to soak cashews for a few hours. But if you forgot to do that and you don’t have time, just soak cashews in hot boiling water for 10 to 15 minutes. They will be done. Easy, Right?

I also add a little extra water in the gravy after adding potatoes so that I can let the potatoes cook in it for a little longer. It lets them absorb all the flavor and the gravy also becomes so delicious and flavorful. One ingredient that is a must is Kasuri Methi. That is a game-changer in all the gravies. I even add it in dal makhani, paneer tikka masala, pindi chole. It makes everything tastier.

CAN WE MAKE IT VEGAN?

One non-vegan ingredient that I added in the gravy is Curd. It adds a nice tanginess to the gravy. But you can simply omit that. Even the tomatoes give a hint of tanginess to the gravy. Or if you have vegan curd, just add that. I tried it with vegan soy yogurt too and it was hard to tell any difference. I added ghee in the end but that is totally optional. You can skip it and it won’t change the taste.

HOW TO SERVE DUM ALOO?

You can serve it with hot chapatis and plain rice. If you want to party at home, just make some parathas or naan. They taste so very good with dum aloo. You can make jeera rice too.

If you find it too spicy, enjoy this with some curd on the side. Also, don’t forget some thinly sliced onions for a salad.

Now you are all ready to make this delicious dum aloo at home. It is perfect for lunch or brunch over the weekend. So, grab all the ingredients because you are ready to make a happy meal for yourself.