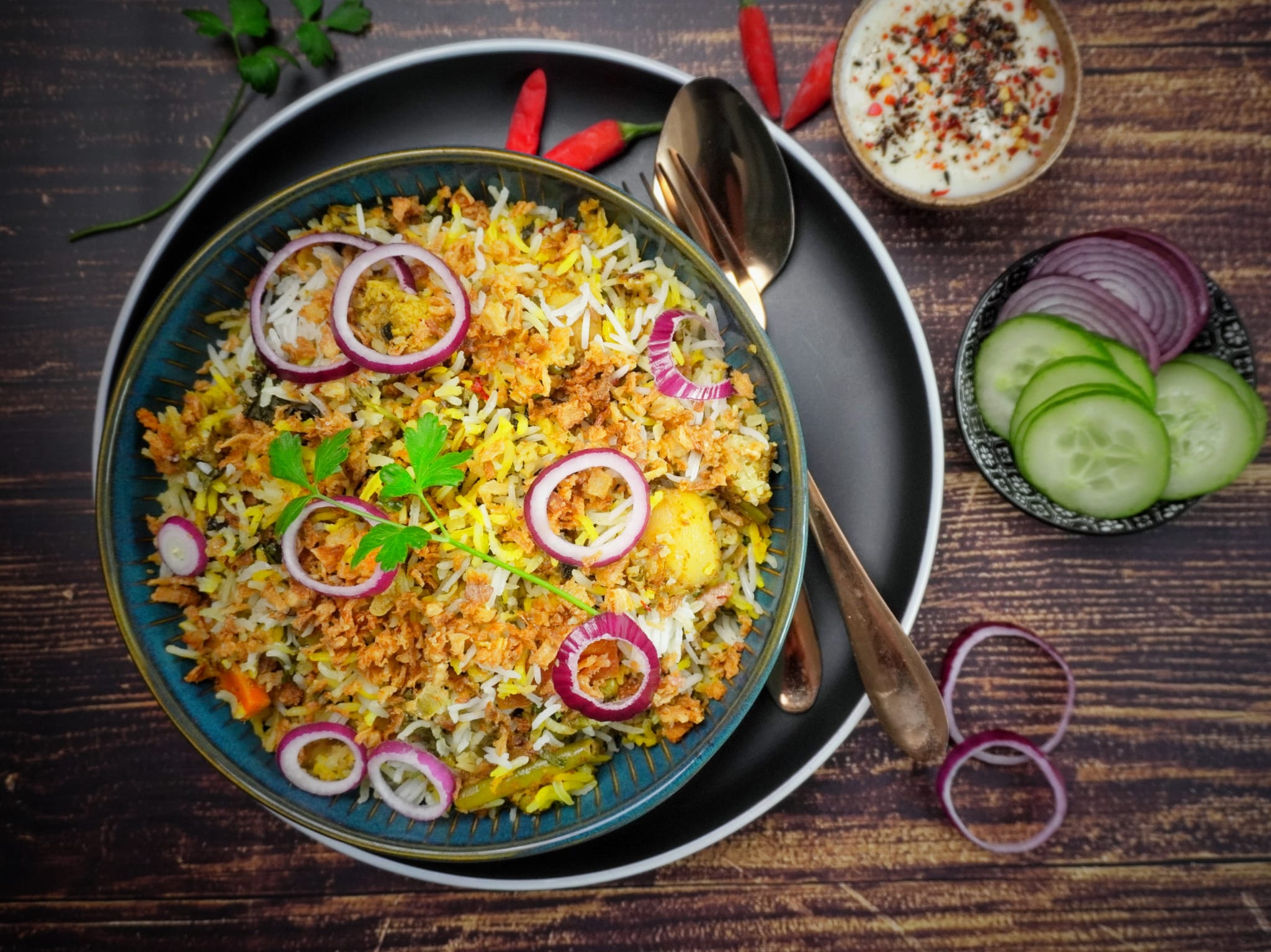 I have just three words to describe this vegetable dum biryani – flavourful, aromatic, and delicious. This is the creation of love, time, and a lot of patience. Isn’t it similar to marriage? Well, good things happen when these three things combine.

Jatin loves dum biryani. It is one of his favorite recipes. He is not a big fan of rice but he can have dum biryani every week. There are a few things that are so close to his heart that he tries to replicate the same restaurant-style taste at home. One of those recipes is this vegetable dum biryani. Other recipes are – ghewar, masala dosa, and Pindi chole.

He tried to make vegetable dum biryani at home but sometimes the spices were not balanced, and sometimes the rice didn’t have that nice flavor. After a few attempts, he lost the battle. Then, entered his wife – Me 🙂 I tried to replicate the taste which he likes – Reddy’s Dum Biryani. He enjoyed the biryani which I made for him. No complaints. But it was not like Reddy’s Dum Biryani. I tried more. And one day, he loved it so much and in the end, he said – It is like Reddy’s Biryani. Ahhhhhh…MISSION ACCOMPLISHED!

It makes me wonder, do I live to impress him with food? Hmmmm…

Anyway, this time I thought to make the vegan version of his favorite Sabz Dum Biryani. I know it will create a lot of controversies but I think my vegan friends deserve this deliciously made biryani recipe. You are going to love it a lot. It is my guarantee.

If you are in a hurry, watch the video instead and If you enjoy watching it, Plz Subscribe to our Youtube channel.

Tips to Make it Right

Marination is not just coating the vegetables with some spices and curd mixture and using it in the recipe. It needs time to develop more flavors. Resting time is important. We add some acidic ingredients to the marination (like curd) because it helps the flavors to seep into the cut vegetables. And this process takes some time. That is why, whenever you marinate, be it vegetables in dum biryani or paneer in paneer tikka masala, always let it rest for at least 30 minutes. No Shortcut!

Cooking the right perfectly is as important as choosing the right kind of rice for dum biryani. If you can manage to get long grain biryani rice, use that. Otherwise, you can use any long grain rice for this recipe. But while cooking, make sure they don’t break or become mushy. DO NOT stir continuously. Wash the rice gently. Otherwise, the grains will break. Do not overcook them.

How to make flavourful rice for biryani?

You need to partially cook the rice, till they are 80% cooked. Rest cooking happens in dum. But the excitement of eating biryani vanishes if the rice is not flavourful enough. For that, make sure the water in which you are boiling the rice is salted enough. It should taste like seawater. Otherwise, the rice grains in biryani feel bland in taste. Also, add some whole spices to the boiling water. That way, the rice grains get all the flavors and aroma which makes the biryani even more delicious.

How do we make sure that rice is non-sticky when cooked?

There are two things that you need to do. First, while adding rice to the boiling water, add some lemon juice too. Lemon juice prevents the rice grains from sticking to each other. Also, once they are 80% cooked, drain off the water and transfer the rice to a large plate, and spread evenly. This cools down the rice fast resulting in non-sticky rice grains.

I say this a lot and I am saying it again – PATIENCE is the key. Yes. To get the most flavourful biryani, you need to let it slow cook for a long time. There is no room for hurriedness. Otherwise, you will end up with a spicy vegetable pulao and not a delicious dum biryani.

Other recipes that need slow cooking are – Dhaba style dal makhani, Pindi Chole. Patience is the key to getting the most out of these recipes. So, take a deep breath and then start cooking.

We had the best biryani of our life in a hotel. I don’t remember the name of the hotel but they had some Afghani festival going on and they were serving some delicious Afghani food at that time. We ordered vegetable biryani there and when the waiter got our order, the aroma was something which we still remember. The fragrance of rose water was so good and distinct. I tried to replicate the same aroma at home using pure rose water or by adding a lot of rose water to the biryani. It doesn’t work.

What worked is this trick – add rose water once the biryani is done. Yes. You read it right. There is no point in adding rose water while biryani is cooking. When you cook the biryani for such a long time, the aroma of rose water just fades away. The fragrance of all the spices becomes more dominant. That is why always finish off the cooked biryani with some rose water. It leaves a nice, distinct aroma in your home-cooked biryani.

How to cook Dum Biryani at home?

There are various methods of cooking dum biryani at home.

How to serve Dum Biryani?

Biryani tastes amazing with some thinly sliced onions on the side and some cucumbers too. Although, cucumber makes the flavor a little less spicy. I like it but Jatin prefers just some onions with biryani. We also enjoy this vegan dum biryani with some boondi raita or curd which I make using plant-based curd. It tastes so amazing. I am drooling. I am going to make it tomorrow.

Is this recipe vegan?

Yes. This recipe is vegan and made with plant-based ingredients. But if you are not vegan and looking for a vegetarian Dum Biryani, you can check out this recipe – Sabz Dum Biryani.

Now you are all ready to make this delicious vegetable dum biryani (vegan) at home. It is perfect for lunch or brunch over the weekend. So, grab all the ingredients because you are ready to make a happy meal for yourself.